This report is the second in a five-part series on the “State of the Unions” for Illinois, Indiana, Iowa, Minnesota, and Wisconsin. All five reports will be available at this link over the next month.

A new study released today finds that organized labor still plays a considerable role in Indiana’s economy, despite a decline of approximately 52,000 union members over the past decade.

The study, The State of the Unions 2016: A Profile of Unionization in Indianapolis, in Indiana, and in America [PDF] was conducted by researchers at the Midwest Economic Policy Institute, and the Project for Middle Class Renewal at the University of Illinois at Urbana-Champaign.

Since 2006, Indiana’s union membership rate has declined by 2.0 percentage points, from 12.0% to 10.0%. As a result, there are nearly 126 fewer labor unions and similar worker organizations in Indiana than there were ten years ago. 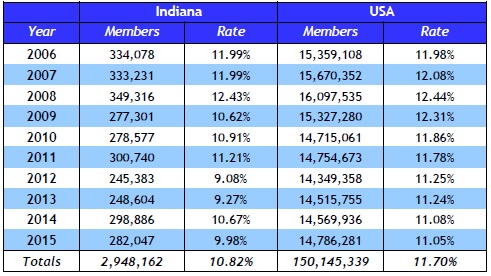 Indiana’s “right-to-work” law has contributed to lower union membership. After the policy was implemented, union membership fell from 11.2% in 2011 to 9.1% in 2012. An initial Lake Superior Court ruling by Judge Sedia struck down the law and union membership rebounded to 10.7% in 2014. However, a decision by the Indiana Supreme Court reversed the lower court’s ruling, leading to the subsequent decline in union membership to 10.0%.
As of 2015:

Efforts to weaken the labor movement in Indiana have disproportionately impacted these workers.

The report also finds that labor unions raise worker wages by 15.1% on average. Indiana’s “union wage premium” is the 2nd-highest in the nation and higher than all bordering states. The union wage effect is greatest for the middle 50 percent of workers, ranging from a 15.3% to a 17.9% increase in worker earnings. The impact is also higher for non-white minority workers (28.9%) than for white, non-Latino workers (13.1%).

The State of the Unions 2016: A Profile of Unionization in Indianapolis, in Indiana, and in America can be found here.