A new report released today by the Illinois Economic Policy Institute (ILEPI) finds that high corporate taxes are not deterring businesses from locating and operating in Illinois. In fact, the data shows that corporations locate in Illinois at a higher frequency than in neighboring states.

In 2013, Illinois was rated as having the 29th-best tax climate in nation in the State Business Tax Climate Index– behind Indiana (11th), Missouri (16th), and Kentucky (24th). The combined state and local corporate tax rate was 9.5% in that year.

However, despite claims that Illinois was “bad for business,” economic data report that Illinois fared well against its neighbors in 2013.

Compared to Indiana, Iowa, Kentucky, Missouri, and Wisconsin – Illinois had: 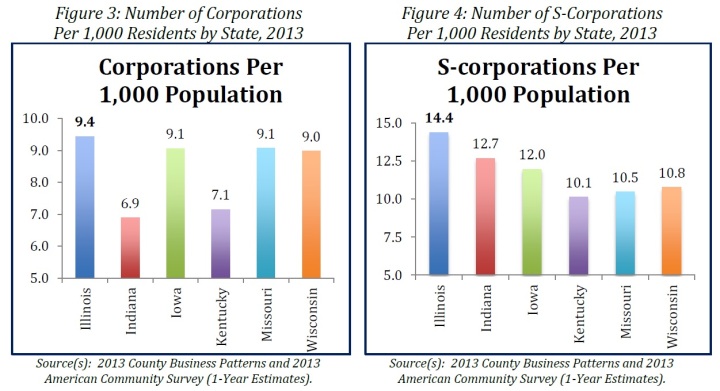 Claims that Illinois’ business environment is falling behind neighboring states are refuted by the actual actions of corporations and companies. Illinois attracts companies – both large and small – to locate and operate within the state. The state is competitive with Indiana, Iowa, Kentucky, Missouri, and Wisconsin, and offers a higher-skilled and better-paid workforce than neighboring states.

Ultimately, Illinois remains a great place to do business.