What impact does international free trade have on the Illinois economy? Is it mostly good, mostly bad, or somewhere in between? How can Illinois capitalize on the benefits of trade while mitigating the losses? A new report by the Illinois Economic Policy Institute and the Project for Middle Class Renewal at the University of Illinois at Urbana-Champaign investigates.

The Full Report, The Costs and Benefits of International Trade in Illinois: Estimating Impacts on Manufacturing and the Economy, is available here [PDF].

There has been a general consensus among economists that international free trade is an important source of economic growth for countries. International trade allows nations to specialize, promotes innovation, and has led to higher income growth and longer life expectancy. However, recent evidence finds that trade hurts local jobs and worsens income inequality. Mass job displacement can have significant effects on the national economy and public budget.

It is thus no wonder that the American electorate has become divided on whether the free trade has positive or negative impacts on the economy. A recent FiveThirtyEight poll, shown below, demonstrates the national divide. 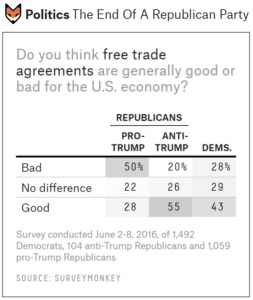 What impact does international free trade have on the Illinois economy? Is it mostly good, mostly bad, or somewhere in between?

As the 5th-largest exporter state and the 6th-largest importer state in the nation, Illinois is particularly exposed to international trade. Manufacturing employment in Illinois today is now 15% lower than it was a decade ago.

This is the paradox of international free trade: While trends in manufacturing have caused total employment losses in Illinois, they have expanded the state’s economy.

The gains from trade have become concentrated amongst the wealthy. Workers displaced from jobs that once paid a living wage have been forced to find employment in other, mostly low-paying, sectors of the economy. The overall impact has been to widen the income gap between the rich and the poor in Illinois.

What can Illinois do to re-develop its manufacturing sector?

Illinois must prepare its workforce for the future. Manufacturing is a critically important industry to develop. Manufacturing employment is typically higher-paid, generates increased economic value, and triggers additional employment to support manufactures.

At the state-level Illinois can take at least six steps:

Where displacement of production workers does occur, protecting the state’s prevailing wage law in the construction industry, making college more affordable and accessible, and increasing investment in worker retraining programs would help lift up workers who transition to other occupations. Raising the minimum wage would also help many displaced manufacturing workers who are forced to find work in food service, food preparation, and building and grounds crew occupations.

International free trade and technological advancements provide substantial benefits to the Illinois economy. Mitigating the losses of these positive forces, especially on the manufacturing industry, is crucial to the future success of Illinois.