Chicago voters are willing to pay higher taxes for more services, according to a poll released yesterday by the Illinois Economic Policy Institute (ILEPI). Anzalone Liszt Grove (ALG) research was commissioned by ILEPI to conduct the poll and report the results.

When asked which issue Mayor Emanuel and the City Council should focus on, Chicago voters ranked schools and education (35 percent) and crime and police issues (34 percent) as their top priorities.

Chicago voters also trust Mayor Emanuel more (51 percent) than Governor Rauner (23 percent) to manage budget priorities for the city, although nearly one-fourth of voters responded “Neither” to the question.

Two out of three voters support additional taxes to pay for more police officers and a majority are willing to pay more to maintain roads, expand educational programs, build schools, and provide other neighborhood services. 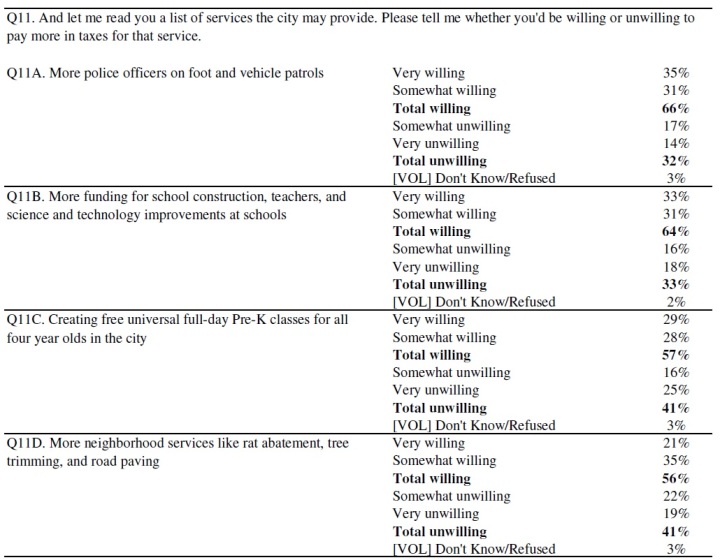 Additionally, 61 percent support the municipal pension agreement reached between Mayor Emanuel and city workers. “Voters are willing to pay more in taxes and fees to honor their promises to workers as well as to improve education, public safety, and neighborhood services like road paving,” said Brian Stryker, partner at ALG research.

Previous research performed by ILEPI found that Illinois is not overtaxed in comparison to other Midwest states when differing tax structures are examined.

“Illinois’ average household income is between $11,000 and $17,000 higher than neighboring states, which is a big part of the reason that Illinoisans’ tax bill is larger,” said Frank Manzo IV, ILEPI Policy Director. “But when you look at taxes paid compared with income, Illinois is in the middle of the pack in the Midwest. The notion that Illinoisans face a significantly higher tax burden than other states is largely unfounded.”

The full poll, which surveyed 600 Chicago residents who voted in the 2011 and 2015 mayoral elections, can be found here: https://illinoisepi.files.wordpress.com/2016/08/il-epi-chicago-poll-baseline9.pdf.