Illinois’ unemployment rate dropped by 1.3 percentage points over the year, the 4th-largest drop in the United States. Wyoming, West Virginia, Oregon, and Nevada had similar drops. The only other Midwest state to rank in the Top 10 by unemployment rate change was Indiana, with a 1.1 percentage-point drop.

But a drop in the unemployment rate is not necessarily good news.

Illinois had the 9th-slowest job growth in the nation. From April 2016 to April 2017, employment increased by only 0.4 percent in Illinois. Employment declined in six states. Among them, Kansas, which is facing a similar budget deficit due to an obstinate Republican Governor, saw a 0.2 percent decrease in employment. Meanwhile, in Minnesota– a state with divided government but a $1.65 billion surplus– employment grew by 1.7 percent over the year.

Illinois’ labor force shrunk over the past year. The number of people in the labor force dropped by 0.7 percent from April 2016 to April 2017. This placed Illinois 51st among all states plus the District of Columbia, or dead last. Also in the Bottom 10 by labor force growth were Iowa (-0.5 percent), Missouri (-0.2 percent), and Indiana (+0.2 percent), reflecting overall weakness in the region. 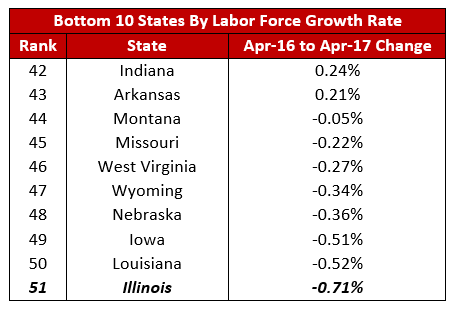 The State has gone two years without an annual operating budget. The backlog of bills has nearly tripled over the past two years from about $5 billion when Governor Rauner assumed office to $14.3 billion today. If they haven’t already, businesses are starting to lose confidence in Illinois.

Recently, the Civic Committee of the Commercial Club, a pro-business group in Chicago, “effectively sided against Gov. Bruce Rauner in the state’s bitter budget war” with a proposal to raise $8 billion in new revenues and cut $2 billion in spending. Among the revenue hikes are a 5.0% income tax and a 7.0% state corporate income tax. The group says that businesses are more concerned about Illinois’ fiscal future than tax rates: “Increasing uncertainty about the State’s fiscal future – as well as the ongoing damage to Illinois’ schools, universities and public services – makes Illinois less attractive to businesses considering where to locate or expand jobs, despite all of its other advantages.” Budget stability is pro-business.

Among its Midwest counterparts, Illinois should look to Minnesota for guidance. Minnesota has a $1.65 billion budget surplus, has an unemployment rate of 3.8 percent, experienced a 1.7 percent increase in employment over the past year, and has the 7th-highest average private sector wages in the country. The average wage for private industry employment is now $26.88 per hour in Illinois, $2.04 per hour lower than in Minnesota but between $1.96 per hour (Wisconsin) and $4.93 per hour (Kentucky) higher than other neighboring states. 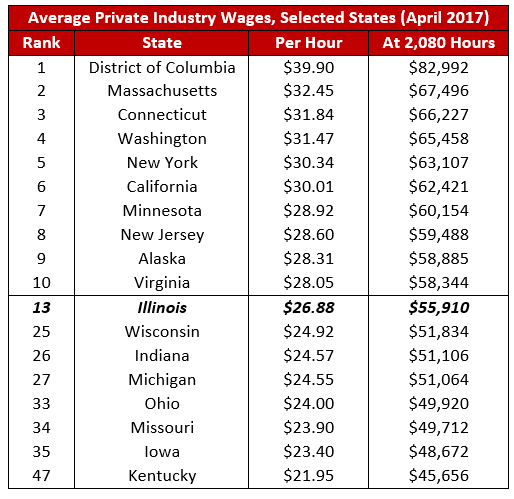