Straight out of college, men working full time earn higher incomes than women working full-time in Illinois. When incomes are evaluated by field of degree, the gender gap persists in most areas of study but disappears in science and education.

The Economic Policy Institute (EPI) recently released a study, The Class of 2017, which found men earn an average of $3 more than women right after they graduate college. The wage gap exists even though newly graduated men and women have about the same amount of education and experience. The study finds that, on average, men ages 21-24 earn $20.87 an hour while women ages 21-24 earn $17.88 an hour in the United States, a nearly $3 difference per hour.

The wage gap may be a bit overstated in the recent study because the EPI does not account for degree attained. Given that men are more likely to join science, technology, engineering, and mathematics (STEM) careers and women tend to join hospitality and caregiver careers, the wage gap may be influenced by primary college major. But does the wage gap still persist when looking within fields of degree?

To find out, the Illinois Economic Policy Institute (ILEPI) investigated American Community Survey (ACS) data for Illinois. Income data were analyzed from 2009 to 2015 for people ages 21-25 in Illinois with only a bachelor’s degree who work at least 35 hours a week. Incomes are adjusted for inflation to 2016 dollars using the Consumer Price Index (CPI-U).

Even when looking by field of study, an income gap persists in many areas. Recent graduates with degrees in business, communications, fine arts, and social science and history experience gender wage gaps in the state. Across all majors, women straight out of college earn $0.85 for every dollar that men earn straight out of college earn on average. The largest wage gap is for young college-educated workers with social science, history, public policy, and social work degrees; women comprise 48 percent of these degrees but earn only $0.75 for every dollar that their male counterparts earn in Illinois. Women ages 21-25 with business and economics degrees make $0.89 per dollar earned by men ages 21-25 with business degrees.

However, there is little to no gender income gap for education degrees and science-based degrees in Illinois. Recent female college graduates with education administration and teaching degrees earn $1.05 per dollar that recent male college graduates take home with the same degrees. The primary reason for the lack of an income gap in education is the presence of teachers unions in Illinois’ public schools, because entry-level teachers in a district are all paid the same collectively-bargained salary regardless of their gender. Additionally, women ages 21-25 in scientific fields –engineering, psychology, and biology, life, and physical sciences– earn between $0.99 and $1.01 for every dollar earned by men ages 21-25 in the respective degrees.

Thus, with important exceptions, a gender income gap exists for newly-graduated Illinois residents who have similar educational and work experience. The average recent female college graduate who works full time earns over $6,000 less in annual wage and salary income than the average recent male graduate who works full time, despite women accounting for a majority (55 percent) of workers earning degrees. Full-time female workers ages 21-25 with business and economics degrees earn nearly $4,800 less than their male equivalents; for recent graduates with social science, history, public policy, and social work degrees, the annual wage gap is more than $10,200 on average. However, women with education and science-based degrees earn about as much as their male counterparts straight out of college.

To improve the gender income gap, Illinois must encourage public schools and science and technology firms to continue their current employment practices. The State must also enact public policies that incentivize other sectors and companies to eliminate pay discrimination on the basis of gender and to learn from industries that hire recent college graduates with education and science-based degrees.

View this article as a Policy Memo: Recent Female College Graduates Earn Less than Their Male Counterparts in Illinois, With Important Exceptions 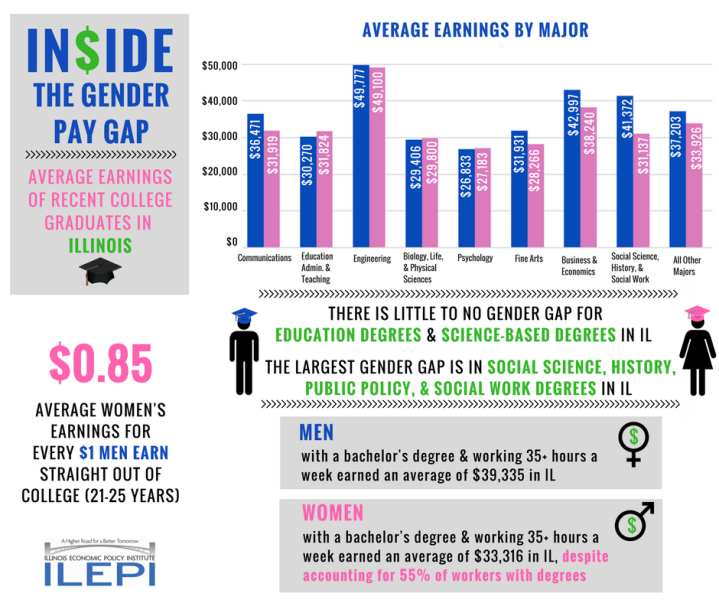