Governments utilize policies to impact the efficiency of labor markets. These policies are designed to increase employment by encouraging people to look for work, make it easier for people to get to work, provide support for people who are working, create opportunities for employment, and help people become qualified to work.

States with higher working-age employment rates also tend to have higher reported levels of well-being, as depicted below: 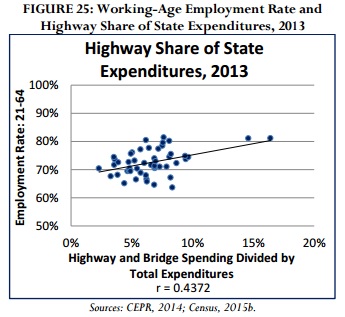 In addition, there is one government practice that indirectly supports employment:

Here’s our data-driven policy proposal: If the state’s flat personal income tax rate is retroactively increased from 3.75 percent to 4.75 percent, the state would generate $3.5 billion in additional tax revenue. We call for dedicating this new $3.5 billion only to five government expenditures.

These public policy changes would boost employment. The working-age employment rate would increase by up to 2.4 percentage points in Illinois, amounting to nearly 180,000 new jobs supported. The policy changes would also add at least $2 billion on net to the Illinois economy, even after accounting for higher income taxes paid. The benefits significantly outweigh the costs.

The public policies that “work” for workers are all investments using taxpayer dollars. Government investments in transportation infrastructure, in the education of residents of all ages, and in future public expenditures all support employment. Other policy changes, such as curtailing union membership or lowering the minimum wage, do not increase the employment rate in any way.

Perhaps unsurprisingly, when nearly 100 of Illinois’ top economics professors and policy professors were anonymously surveyed in August 2015 about policies that would improve the employment rate and grow the economy in Illinois, only four policies out of ten received majority support:

Frank Manzo IV is the Policy Director of the Illinois Economic Policy Institute (ILEPI). Visit ILEPI at www.illinoisepi.org or follow ILEPI on Twitter @illinoisEPI. The full report, Policies That Support Employment: Investments in Public Education, Investments in Public Infrastructure, and a Balanced State Budget, is available here. In addition, the results of The Views of Top Economics and Policy Professors in Illinois are available here.