Physical infrastructure investment is one of the main government expenditures that conclusively enhances economic growth and boosts employment. In a 1997 commentary, Fisher found that highway spending had positive impacts on economic outcomes in 10 of 15 economic studies (67%). In Illinois, the Center for Tax and Budget Accountability has estimated that a $5.9 billion “infrastructure program… would generate about $9.4 billion in economic activity” and could “create about 98,108 jobs.”

The economic impact of infrastructure investment in Illinois can be assessed using “multipliers.” Multipliers account for the interrelationship between an activity and other sectors in the economy, following a dollar as it cycles through the market. A multiplier therefore estimates the “bang for the buck” that one dollar of spending will have on the total economy.

The greatest “bang for the buck” for Illinois taxpayers is returned by government investment in capital infrastructure and investment in education and research. Every dollar spent by state and local governments on passenger transit returns over $5 in economic output to Illinois. One dollar spent on construction of horizontal (road, bridge, highway, and railroad) construction increases economic growth by $1.85 on average. The system that is constructed yields benefits to producers of goods and private sector freight companies – the multipliers for transport of goods by rail and truck return about $2 to the state for every dollar spent. Each of these activities generates a greater economic benefit than the multiplier for all other non-education state and local government spending ($1.71).

These findings echo estimates from market simulations nationwide. Mark Zandi of Moody’s finds that infrastructure spending generates $1.59 for every dollar invested at the national level. This multiplier has a larger societal impact than tax cuts and rebates, which generate as little as $0.29 for every dollar cut. This is because “[s]ome households would spend more freely given the certainty of their lower future tax rates, but most do not have the financial resources to do so.” 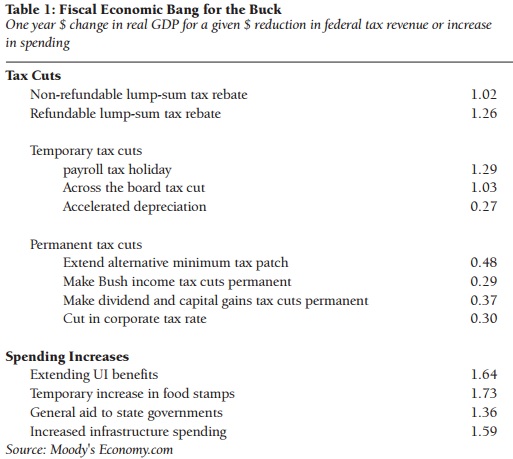 In previous research, Professor Bruno of University of Illinois at I have found that increasing the highway share of state expenditures and reducing the average commute time to work are two of only five policies that statistically increase a state’s working-age employment rate. Infrastructure investment is a public policy that “works” for workers. When the government invests in road and transportation infrastructure, businesses and workers become more connected and congestion declines, increasing available time to engage in productive activities.

The Illiana Expressway– a proposed toll road using a public-private partnership in Will County, Illinois– is one example. The project would generate 10,740 job-years and generate $1.5 billion over the short run. Once completed, the toll road would reduce the number of vehicle miles traveled in congestion by up to 5%, newly connect 20,000 workers to jobs in 30 minutes or less, and spur as many as 18,000 additional jobs over the long run.

Clean water infrastructure investments in Cook County are another great example. In the Chicago area, every $1 billion invested in clean water projects saves or creates 11,200 total jobs on average and generates an 8% economic return on investment over one year. The average blue-collar water infrastructure worker adds more than $162 per hour to the state economy from his labor. These projects are a win for workers, a win for the economy, and a win for the environment.

Illinois has “a significant backlog of overdue maintenance across our infrastructure network [and] a pressing need to build modern and resilient systems,” according to the Illinois Section of the American Society of Civil Engineers. Despite all the progress that Illinois has made in these areas, every day that Illinois fails to make these necessary improvements, the costs for future taxpayers go up.

Increased infrastructure investments today would create middle-class jobs in the short term, reduce costs for future generations, and kickstart the economy over the long term.