Educators are the backbone of a strong, well-educated society.

High quality and productive educators improve the economic prospects of future generations. It is critically important that students are provided the best environment for learning.

The union coverage rate of educators varies by state. Figure 1 shows the percent of unionized personnel in the education, training, and library occupations across the United States. Alaska has the largest percentage of union employees in education, training, and library occupations, at 67 percent. Other highly unionized states include New York (63 percent), Rhode Island (57 percent), New Jersey (56 percent), Maine (54 percent), and Illinois (54 percent). The unionization of educators, trainers, and librarians remains low in Southern states. Overall, 27 of the 50 states have a teachers’ union coverage rate that is above the national average.

Many studies find that unions increase worker productivity. A “meta-analysis” of economic studies shows that there is a positive association between unions and productivity in the United States. While unions have the largest impact on manufacturing productivity, the researchers find that “unions have a positive and statistically significant positive effect on productivity in U.S. education of 7 percent.” Another paper suggests that public schools with labor organizations are more productive by 3 percent.

In general, members of unions tend to be more productive due to high-skill training. Over half of union members who are educators, trainers, and librarians have a master’s degree or higher (Figure 2). Compared to their nonunion counterparts, members of teachers’ unions are 16 percentage points more likely to have advanced degrees – which increase the quality and skills of the employee. In addition, union employees earn 22 percent more than non-members in educational occupations. Union teachers also work 14 percent more hours per week than nonunion teachers. 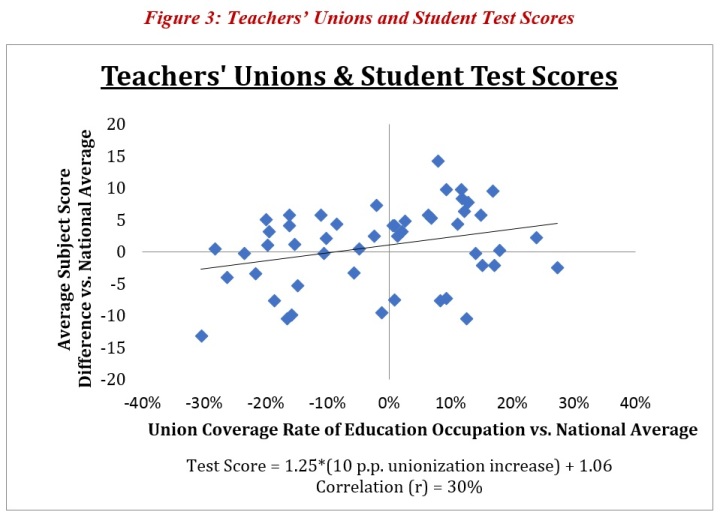 Finally, Figure 5 puts it all together to show the correlation of teachers’ unions and average class size on student test scores. Based on scores in nationally standardized tests (fourth grade reading and math and eighth grade reading and math), greater union membership of educators tends to have a positive impact on student test scores while larger class sizes tend to have a negative effect.

In the statistical analyses, teachers’ unions had a positive impact on fourth grade reading, eighth grade math, and eighth grade reading – but did not show a statistical correlation in fourth grade math. In general, a 10 percentage-point increase in teachers’ union coverage in a state tends to increase test scores by 1.1 to 1.4 points compared to the national average. Meanwhile, class size has significant impacts in all four models: An increase of one student per teacher is statistically associated with a 0.8 to 1.1 point drop in student test scores compared to the national average. Conversely, smaller class sizes improve student test scores.

“The contention that unions play a role in misallocating resources, sending them away from where they are most needed, is a distraction from efforts to address the persistent nature of achievement gaps between advantaged and disadvantaged students.” –Emma García and Lawrence Mishel (2016)

Taxpayers get what they pay for.

But they also work 14 percent more hours per week and are better educated. Union teachers are 16 percentage-points more likely to have a master’s or other advanced degree than nonunion teachers.

In addition, a 10 percentage-point increase in the share of teachers that are covered by labor organizations is generally associated with a 1.1-1.4 point increase in student test scores. Teachers’ unions also often fight for smaller class sizes. To the extent that they are successful at reducing class size, teachers unions have another positive impact on student outcomes: For every one-student decrease in class size, test scores tend to improve by 0.8-1.1 points.

Ultimately, the decline of teachers’ unionization across the United States may have negative consequences on student outcomes and long-term economic growth.

The data we used for this blog is from the Current Population Survey Outgoing Rotation Groups (CPS ORG). We downloaded the data from CEPR and analyzed it using a statistical software package named Stata. Here is the link to the data: http://ceprdata.org/cps-uniform-data-extracts/cps-outgoing-rotation-group/cps-org-data/.