The story of Illinois’ manufacturing is way less cut-and-dried than some think tanks want you to believe. While Illinois has added fewer manufacturing jobs than Indiana over recent years, manufacturing earnings have grown at a much faster pace in Illinois.

The chart below presents data from the Bureau of Labor Statistics (BLS), sorted by largest-growing manufacturing sectors in Illinois. Employment data begin in January 2010 and end in September 2015 (preliminary estimates). The first fact that initially jumps out is that, in the production sectors where Illinois is growing, Indiana is indeed adding even more jobs. Transportation equipment manufacturing, for example, added over 14,000 jobs in Illinois from January 2010 to September 2015. In Indiana, however, over 33,000 jobs were added in this sector.

In total, Illinois only added about 29,000 net manufacturing jobs compared to over 85,000 in Indiana.

The next fact is where the mixed bag begins: Manufacturing worker earnings are growing faster in Illinois than in Indiana. From 2010 to 2014 (the latest year for which data were available), the average annual pay of manufacturing employees grew by 11 percent in Illinois but just 6 percent in Indiana. Note that this growth is not adjusted for inflation.

Annual pay grew faster in Illinois than Indiana in 14 aggregated manufacturing sectors out of the 21 analyzed. 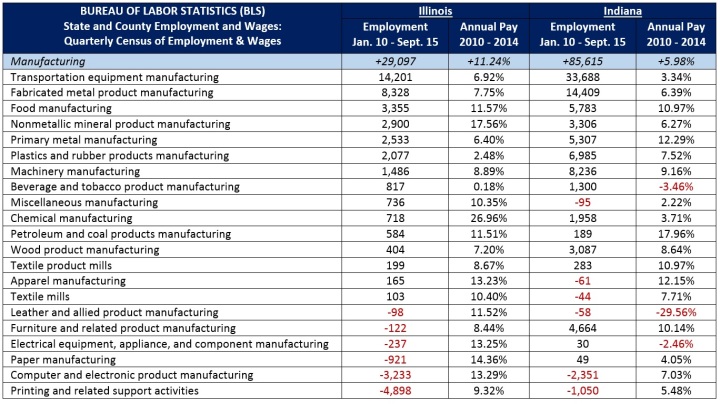 [*Chart can be enlarged on all devices.]

There are a multitude of reasons for this mixed bag.

First, Illinois manufacturers are becoming more productive even as employment has stagnated – meaning that workers are being replaced by more productive automated technologies. The workers who remain employed in Illinois are rewarded for total productivity gains through higher earnings.

Second, annual compensation growth may be slower in Indiana because the state adopted a “right-to-work” law, which has consistently been shown to lower worker wages. The “right-to-work” law won’t save Carrier and United Technologies Electronic Controls (UTEC) from outsourcing 2,100 Indiana jobs to Mexico.

Third, and most importantly, is that global free-trade market forces continue to push manufacturing jobs to lower-skilled and lower-paid regions. At the extreme, this means manufacturing loss to other countries, like Mexico (above), Vietnam, or China. Race-to-the-bottom trade with China alone has displaced an estimated 132,500 jobs in Illinois.

Within the United States, however, Indiana workers earn less than Illinois residents and have lower levels of educational attainment. In fact, as of 2015, 48.8 percent of those in Illinois’ labor force had a college-level degree compared to just 40.5 percent of Indiana’s labor force – an 8.3 percentage point difference.

Indiana’s lower wages and lower levels of educational attainment make it a more attractive spot for manufacturers who are only concerned about the bottom line. It is okay to admit that. It’s just business. And because Illinois has increasingly become a highly-educated state, the manufacturing sector has shrunk as a share of total employment, replaced by substantial gains in white-collar finance, business, and professional careers over time. 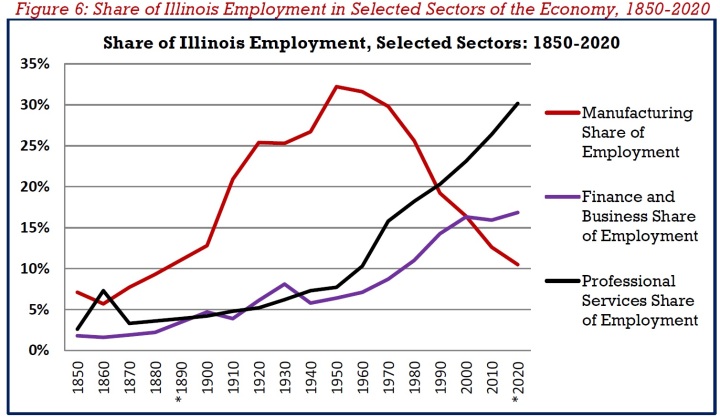 The story of Illinois manufacturing is a mixed bag.

And it is far more likely to be the result of technological advances, free-trade economic forces, and the regional supply of blue-collar labor than any particular state government policy.