The proposed extension of Route 53/120 will bring jobs to Lake County and improve overall transportation movements for residents by alleviating traffic congestion.  These improvements will make Lake County more attractive to prospective businesses, which will provide significant economic benefits. Construction of the Route 53/120 extension will actually provide a net benefit to the local economy and improve the quality of life for Lake County residents.

Full Report: In Support of Route 53/120: Understanding the Transportation, Economic, and Local Impacts of a Modern Roadway

The prospect of extending IL Route 53 into Lake County has been a part of transportation planning in the Chicago region since the 1960s.  Route 53 currently stands as a six-mile controlled access highway extension of Interstate 290 between its termination and Lake Cook Road, just south of Lake County.  The project is currently proposed as a 12.5-mile extension north to Route 120.  In addition, the project will expand and potentially realign portions of Route 120 between Interstate 94 and U.S. Highway 12.

Recent efforts have put the project into the hands of local communities.  The recent development of the Blue Ribbon Advisory Council (BRAC) for Route 53/120 and corresponding Finance and Land Use Committees allowed local elected officials and stakeholders to voice their opinions and ultimately guide the project, from both the design and funding perspectives.  The successful planning process is exemplified by a February 2017 poll commissioned by the Illinois Economic Policy Institute (ILEPI), which found that 66 percent of Lake County voters support the project, compared to just 18 percent opposed.

Added stress to existing roadways will be evident following the expected population and employment growth by 2040. 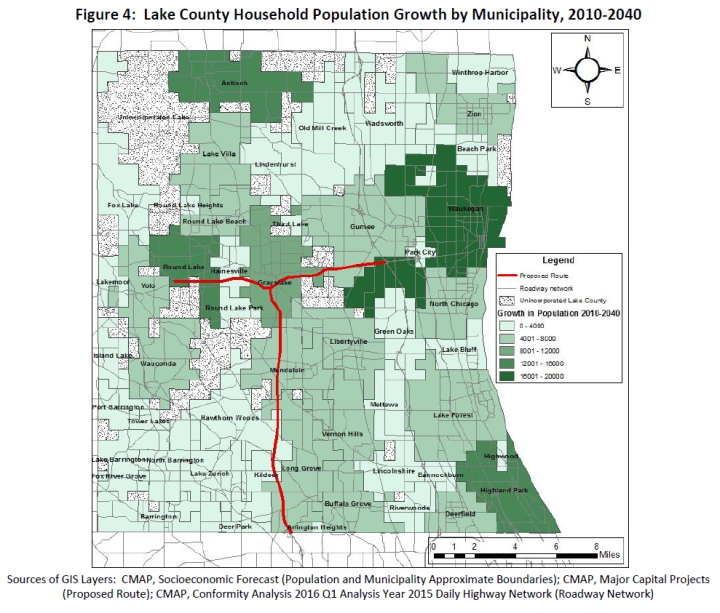 Route 53/120 has the means to reduce traffic volumes on existing routes and improve travel times.  Without some form of transportation improvements, congestion will grow and cause a decline in the quality of life for existing residents.

The construction of Route 53/120 will create jobs and provide extensive economic and transportation benefits to both Lake County and the Chicago region as a whole.

Funding and the Local Impact

The Finance Committee developed relevant funding measures to address the $2.35 billion to $2.65 billion (in 2020 dollars) cost of the project.  Some of which will impact local residents, however the impact is appropriate and reasonable.

In conclusion, Route 53/120 can offer substantial transportation benefits that far exceed costs to the general public.  Following guidance from local participation, the project will address expected growth, improve mobility within Lake County and throughout the region, create middle-class construction jobs, offer the opportunity for new local development, positively impact the region’s economy, and increase the attractiveness of the Chicago region as a location to open or expand businesses. 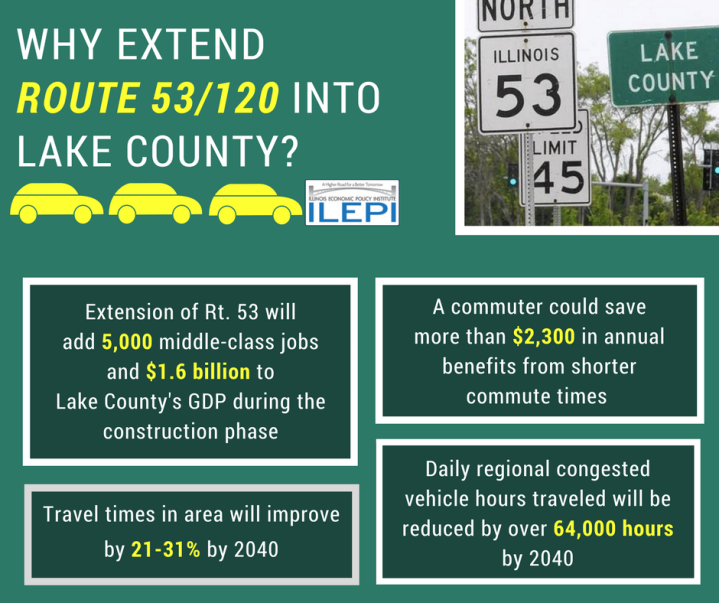