Chicago:  The two-year Illinois budget stalemate reduced enrollment in the state’s public colleges and universities by more than 72,000 students, eliminated nearly 7,500 jobs, and cost the Illinois economy nearly $1 billion per year, according to a new study released today by the Illinois Economic Policy Institute (ILEPI) and the Project for Middle Class Renewal at the University of Illinois at Urbana-Champaign.

“Illinois public universities and community colleges are a $16.1 billion economic engine that support nearly 124,000 jobs and serve nearly 800,000 students every year,” said study co-author and University of Illinois Professor Robert Bruno.  “Faced with a $660 million cut in state support, many institutions exhausted their financial reserves, raised tuition, experienced credit downgrades, cut programs, laid off workers, and reduced in enrollment.  Even with most funding now restored, damage has been done that will have a lasting impact on the state’s economy.”

The local economies hardest hit by the impasse were in the Northeast (Chicago and suburbs) and East-Central (home to University of Illinois at Urbana-Champaign) regions of the state.  Collectively, these two regions represent nearly 80 percent of all statewide losses in higher education-related jobs and economic output.

According to the Bureau of Labor Statistics, the job losses included more than 2,300 instructional positions, touching vital fields such as computer science, nursing, education, business, and mathematics.

“The state budget impasse not only cost thousands of good-paying higher education-related jobs in our communities, it reduced Illinois’ instructional capacity in subject areas most critical to our long term economic and labor force competitiveness,” added study co-author and ILEPI Policy Director Frank Manzo IV.  “Worse, the uncertainty and higher costs triggered by the stalemate drove tens of thousands of students— and a sizable segment of our future labor force— to either pursue educational opportunities out of state, or not at all.”

During the 2015-2017 budget impasse, Illinois colleges and universities worked to reduce the impact of losses in state funding by minimizing growth in expenditures, and by increasing revenue from other sources— including tuition increases of over $900 per student annually.

“As bad as this budget crisis was, the data makes it clear that the already devastating impact of state budget cuts could have been far worse,” concluded Manzo and Bruno.  “The key takeaway is that these institutions do not have a spending problem, they have a revenue problem.  The results of this study should encourage state leaders to prioritize investments in higher education going forward.” 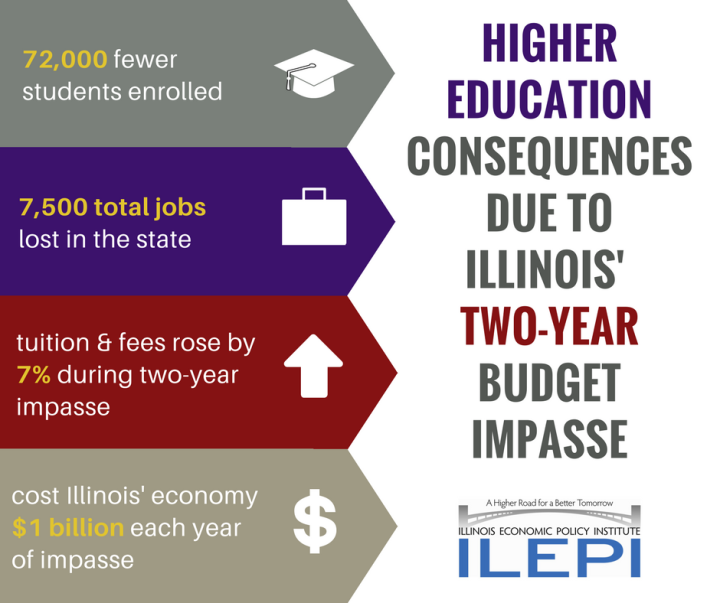 The Illinois Economic Policy Institute (ILEPI) is a nonprofit organization which uses advanced statistics, reliable surveying techniques and the latest forecasting models to develop timely and dynamic analysis of policy issues affecting the economies of the Midwest.

The Project for Middle Class Renewal at the University of Illinois investigates the working conditions of workers in today’s economy and elevate public discourse on issues affecting workers with research, analysis and education in order to develop and propose public policies that will reduce poverty, provide forms of representation to all workers, prevent gender, race, and LGBTQ+ discrimination, create more stable forms of employment, and promote middle-class jobs.