New Bureau of Labor Statistics data released last Friday show that Illinois’ unionization rate increased by 0.5 percentage point in 2017. The number of union members in Illinois also increased over the year, from 812,000 to 827,000. At 15.0%, Illinois’ union membership rate now towers over each bordering state. The unionization rate in neighboring states ranges from 7.0% in Iowa to 9.6% in Kentucky. 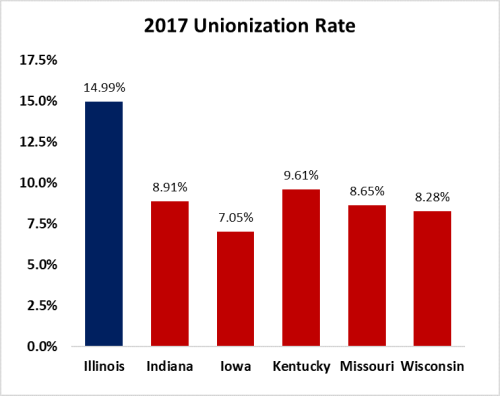 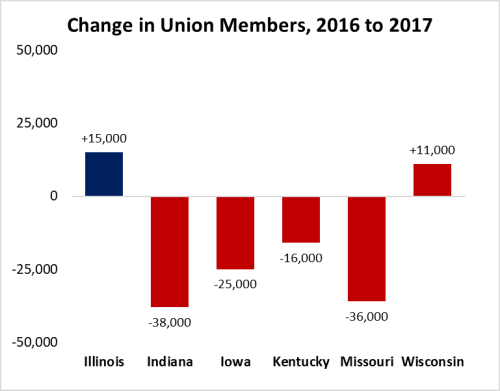 How do so-called “right-to-work” laws factor into these numbers? A “right-to-work” law is a government regulation which prohibits workers and employers from including fair-share clauses into private contracts, which ensure that workers pay dues for services provided by the labor union. Covered employees are only required to pay for the cost of bargaining and representational activities and are not forced to finance political activities. “Right-to-work,” on the other hand, makes the payment of dues optional, allowing workers in any bargaining unit to “free ride” and use union services without contributing to them. This limits union resources and reduces unionization.

All of the states that border Illinois are “right-to-work” states, except Missouri. Right-to-work laws became effective in February 2012 in Indiana, March 2013 in Michigan, March 2015 in Wisconsin, and January 2017 in Kentucky. The Missouri legislature passed a “right-to-work” bill that was set to take effect in late August 2017, but enactment was suspended after organizers collected enough signatures to delay it. In November 2018, Missouri voters will get a chance to vote for or against the “right-to-work” law.

While these annual numbers are interesting, they should also be placed in context. In 2016, for instance, union membership increased by more than 56,000 members in collective-bargaining states but decreased by over 293,000 in “right-to-work” states. Thus, collective-bargaining states continued their gains from the previous year while “right-to-work” states were offsetting substantial losses.

Finally, the Illinois Economic Policy Institute and the University of Illinois at Urbana-Champaign released a study in 2017 which found that the introduction of “right-to-work” laws in Indiana, Michigan, and Wisconsin reduced unionization by 2.1 percentage points (and lowered worker wages by 2.6%). The fact that Illinois gained 15,000 union members while most bordering states lost members is consistent with this economic research, and indicates that “right-to-work” is likely a contributing factor.