On Wednesday, April 4, 2018 the Transportation: Regulation, Roads & Bridges Committee of the Illinois House of Representatives held a hearing titled “Effects of the Proposed Federal Infrastructure Plan.”  Mary Craighead, AICP, transportation policy analyst with ILEPI, submitted testimony that is summarized below. 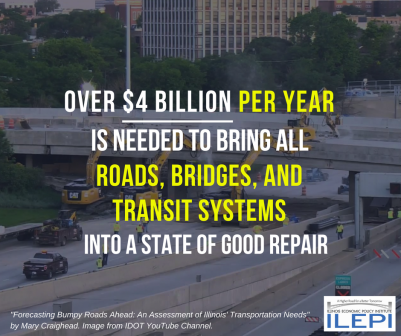 Click here for a PDF version of the testimony.

Good morning Mr. Chairman and Members of the Committee.  My name is Mary Craighead and I am the Transportation Policy Analyst with the Illinois Economic Policy Institute (ILEPI).  We are a non-profit research organization that provides analyses on major policies and projects affecting the economies of Illinois and the Midwest, with transportation and sustainable funding sources being primary areas of research.

An efficient and effective transportation system is vital to every Illinois resident, employee, and business.  It guarantees the public’s access to their jobs, schools, hospitals, and countless other public services.  It ensures businesses can deliver their products to markets and that consumers can access those markets.  Ultimately, investing in a reliable transportation system is about improving our quality of life and our economic competitiveness.

Historically, the state could depend on federal funding to supplement its own transportation investments.  However, with the recent release of the federal infrastructure plan, Illinois may soon be relying mostly on its own revenues.  The $1.5 trillion federal infrastructure plan proposes only $200 billion in direct federal capital that is expected to be supplemented by local or private funding.  In light of this, Illinois should now be closely examining its funding mechanisms to ensure adequate funding for both its own systems, and the ability to take advantage of the proposed federal programs.

ILEPI released a transportation needs assessment this morning, which examines statewide maintenance needs for IDOT roads and bridges and transit systems and existing funding shortfalls, and provides this close analysis.

Little has changed in Illinois over the last two decades in regards to transportation funding.  The motor fuel tax remains a primary funding source, however the gasoline tax has remained at $0.19 per gallon since 1991.  This has resulted in a decrease in gasoline tax receipts from $1.7 billion in 1999 to under $1.4 billion in 2015 (in 2017$); to put this into perspective, the average motor fuel tax paid by a licensed drive in Illinois decreased from $223 to $158 within the same time frame.

As a result, Illinois’ transportation system is in dire needs of improvements. Specifically, our report details that almost 20% of all IDOT roadways are currently in “poor” condition, compared to only 8% in 2001; and the number of roadway miles in “excellent” condition decreased from 33% in 2001 to only 20% in 2016.  “Backlog” IDOT roadway miles increased from 1,700 in 2000 to over 3,300 currently – an 85% increase.  Sixty-two percent of the state’s bridges are over 30 years old, with roughly a third being more than 50 years old.  And less than 60% of systems and 70% of guideway elements of the Regional Transportation Authority are considered to be in “good repair” or within their useful life.

Our analysis found that the total additional funding required to address backlog amongst these systems currently stands at $4.6 billion per year.  It’s worth noting that even more funding would be necessary to address congestion and other mobility needs.

To put that into perspective, the gasoline tax would need to be as high at $0.85 per gallon and the special fuel tax would need to be as high as $1.00 per gallon to make up this shortfall.  Similarly, vehicle registration fees could be increased to $578 per vehicle to generate needed revenues, a 472% increase.  Or, as outlined in a past report by ILEPI, alternate funding mechanisms could be considered, with a vehicle miles traveled fee between 4 and 5 cents per mile generating nearly as much needed.

Ultimately, massive changes are needed and based on the current sentiment of the federal government, we can expect minimal support from other sources.  It is time for Illinois to begin considering how the state will come up with infrastructure funds to not only address the massive backlogs, but also compete under the new federal infrastructure plan.