This report is the third in a five-part series on the “State of the Unions” for Illinois, Indiana, Iowa, Minnesota, and Wisconsin. All five reports will be available at this link over the next month.

A new study released today finds that organized labor still plays a role in Iowa’s economy, despite a decline of approximately 23,500 union members over the past decade.

The study, The State of the Unions 2016: A Profile of Unionization in Iowa and America [PDF] was conducted by researchers at the Midwest Economic Policy Institute and the Project for Middle Class Renewal at the University of Illinois at Urbana-Champaign.

Since 2006, Iowa’s union membership rate has declined by 1.7 percentage points, from 11.3% to 9.6%. As a result, there are 36 fewer labor unions and similar worker organizations in Iowa than there were ten years ago. Over 350 employees working for labor unions have lost their jobs over the decade. 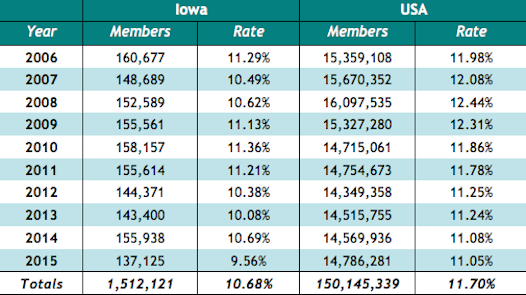 Declining unionization and income inequality are linked. From 2009 to 2012, earnings for the top 1 percent of workers increased by 39.3%, while incomes grew by just 2.8% for the bottom 99 percent of workers in Iowa- meaning that the richest 1 percent captured almost two-thirds of the growth in income over that time.

Efforts to weaken the labor movement in Iowa would disproportionately impact these workers. 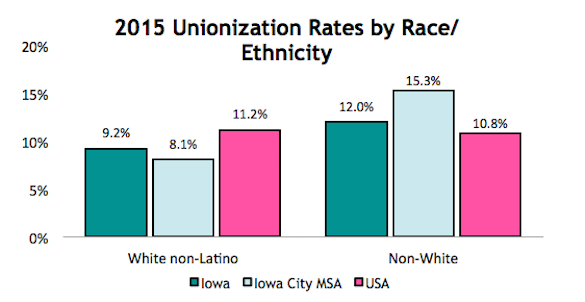 Labor unions increase individual incomes by lifting hourly wages in Iowa. The report finds that labor unions raise worker wages by 4.8% on average. However, the union wage differential is greatest for the lowest 10 to 25 percent of workers, ranging from a 5.2% to a 9.2% increase in worker earnings.

The State of the Unions 2016: A Profile of Unionization in in Iowa and America can be found here.