It is time to assess studies forecasting what would happen if Indiana repealed its prevailing wage law. A Ph.D. economist who has studied prevailing wage for 24 years was 100% accurate. A partisan ideologue was only 14% correct. Trust the expert, not the rhetoric.

In the year prior to repeal, economic studies were published on the pros and cons of the Common Construction Wage, providing general forecasts on the impact that repealing the policy would have on Indiana’s construction market. The authors of each study appeared before the Tax and Fiscal Policy Committee in the Indiana Senate to testify on their findings:

Data have now become available to assess the effects of repeal of Common Construction Wage in Indiana. In a new report that I co-authored with economics professor Kevin Duncan, Ph.D., The Effects of Repealing Common Construction Wage in Indiana: Impacts on Ten Construction Market Outcomes, we essentially “test” the claims made by policy researchers in the months leading up to repeal. Looking at real-life data, how has Indiana done since repeal? What actually has happened to wages, skill levels, productivity, turnover, market competition, and school construction costs?

The evidence indicates that Philips was accurate in his forecasts while Sherk’s testimony was largely incorrect. Here is a table of what each researcher said and what Professor Duncan and I found. 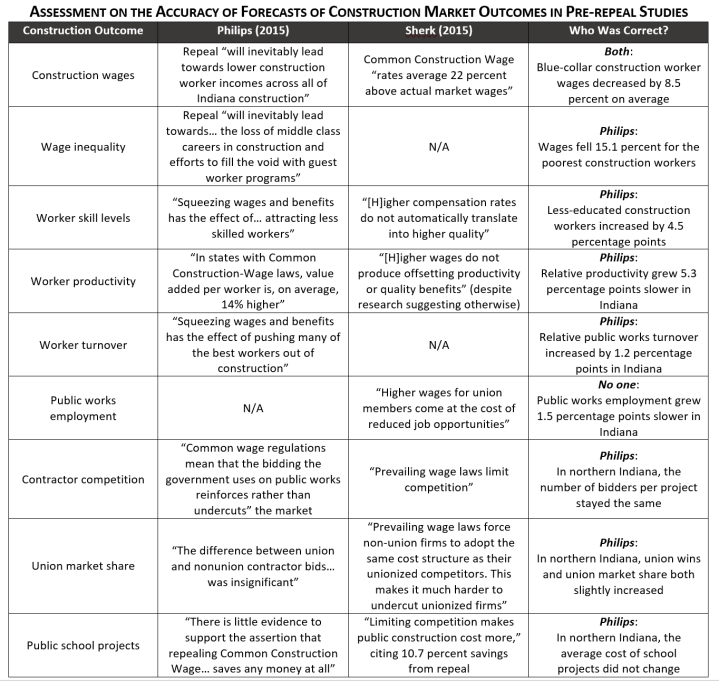 And why wouldn’t Professor Philips have been more accurate? He is one of the nation’s foremost construction labor economists and he has studied prevailing wage laws for 24 years. He studied what happened after repeal of prevailing wage laws in the 1970s and 1980s in Alabama, Arizona, Colorado, Florida, Idaho, Kansas, Louisiana, New Hampshire, and Utah. Meanwhile, Sherk is a partisan researcher who now serves as an adviser to President Trump on the White House Domestic Policy Council. Sherk’s failing grade was due to an incomplete understanding of the construction industry grounded in assumptions that are at odds with peer-reviewed economic research.

The Indiana experiment should be a lesson in trusting the experts, not the partisan rhetoric. Blue-collar construction worker wages have been cut and lesser-educated individuals have replaced high-skilled workers, while contractor competition has not increased and public school construction costs have not decreased.

In all likelihood, Representative Ed Soliday, a Republican who serves as Assistant Majority Floor Leader in the Indiana House of Representatives, probably wishes that his colleagues would have listened to the experts instead of the ideologues when he attested last year that: “We got rid of prevailing wage and so far it hasn’t saved us a penny. … There’s not 22% savings out there when the total cost of labor is 22%. It’s rhetoric. So far, I haven’t seen a dime of savings out of it.”

To read an Executive Summary of the report, click here.